Is Chris Young, credited with being a member of the Occupy Sarasota group, a protester, or a Vandal.  He himself stated, in a televised interview, that he did not know they were going to be there so, does that make him a member of the group, or just a cause that they can take up for more publicity?

Chris Young was arrested by Sarasota Police when he refused the order to stop writing on the sidewalk, by the officer who arrested him.  He has since be claimed by the Occupy Sarasota group, and the American Civil Liberties Union, as a sort of poster child for tree speech. 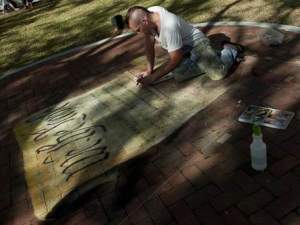 This, to the left, is a photo of Chris Young’s work,  published in the Sarasota Herald-Tribune.  I take it that he was arrested before the completion of his  work of ART,  and so that might explain why the point of his protest is unclear.

This is a photo of Truman Adam, in another photo published by the Sarasota Herald.  This was taken as he was using chalk, much like Chris Young, to portray the United States Constitution.  This protest, of the earlier arrest, was carried out WITH A PERMIT.

Mr. Young‘s doodling have been compared to the recent Art Festival where a section of downtown road was closed off to allow chalk drawing, which were later washed away.  The second protest, with chalk, was permitted because the groups had promised to clean up after themselves.

Sarasota City commissioner Shannon Snyder, and ex-cop, had this to say about the chalk, “The city has an obligation to control its property,” Snyder said. Protesters have been doing the chalk thing for weeks, and “they weren’t cleaning it up. They were leaving it there, as part of their protest.”

In this country we believe in exercising out right to free speech.  My question would be : Does this give us the right, whether in chalk or paint, to deface other people’s property, be it that of a private citizen or government?  If I were to go to the homes of the Occupy Sarasota people to write slogan on THEIR sidewalks, or driveways, would they, or the ACLU, support my freedom of speech of would the have me arrested.

The most probable outcome would be my arrest, rightly, with both the Occupy Sarasota and ACLU telling me that they could NOT support a right to deface property.

In THIS I support the Sarasota City Police Department whole heartedly.

By That Joe Guy

Ex SSgt in Air Force Security Police... I had 10 years of active duty and inactive reserve. I have a total of 20 years, includes Air Force SP, security experience. I also worked 8 years and 4 months in the Garden Center of the Sarasota Cattleman Walmart. I also took the CCNA class at Sarasota Vo-Tech, when it was still called that. I am now, since 2010 a caregiver for my Mother. While I am now a registered Republican I am more likely to vote for whichever person I believe will do a better job.. In the last presidential elections I voted Libertarian, as I the two main choices seemed to be between lying crook, or an uncouth babler who could not be trusted.

View all of That Joe Guy's posts.

This site uses Akismet to reduce spam. Learn how your comment data is processed.