We had a recent close call with some scammers using Ebay Motors.

It started out with my brother, who lives in Colorado, trying to find a used Motorhome…  he did 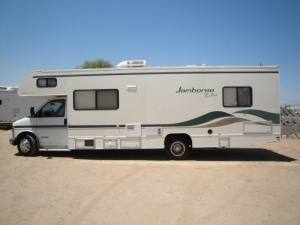 , and this is what he found… a 2000 Fleetwood Jamboree.  The idea was to have a vehicle that would allow him to visit us here in Florida.  He has a number of dogs that would HAVE to come with him, as it would normally take several weeks to make the trip.

This all sounded good, and over the next several days he dealt with a Gianni Simone..  well here is a portion of the first email.

The Fleetwood is still available for sale. It’s a 2000 Fleetwood JAMBOREE RALLYE, 8 – Cyl., White, 29.5′ feet, 28,180 miles, automatic, single owner, extremely clean camper, locks and seats, sound system, clean title and no accidents.  I just changed the generator oil and filter. All the maintenance have been performed to the Fleetwood dealer only. As for the engine oil, i always used Amsoil Premium 10W-40W, i know that it’s the best for my RV. No leaks from rain, no damage on the camper, ALL SYSTEMS 100% WORKING.
I’m the owner and the camper is paid off. My father worked at Fleetwood Motor Homes of California and had access to the employee store. Now the I’m located in Lake Havasu City, AZ and the RV is with me. The reason i’m selling it is that i need some money to buy a new house, we want to move in Phoenix. I just got promoted with my job and i need to move to my new office in Phoenix.
If you are interested and you have the funds available you can buy it on ebay by hitting Buy it Now button and complete the process.  Also on ebay you will find more pictures and more details/specifications about the RV.

I’ll be able to arrange shipping if needed at my expenses, but i want to close the sale trough ebay to secure our deal, because it protects both buyer and seller.

Many thanks,
Gianni Simone

It seemed to be a great deal, though he wanted $1,000 or $2000 upfront..  A deal was worked out to purchase the vehicle through the Ebay Vehicle Purchase Protection (VPP) plan..  That sounded good.  The idea was that we would wire transfer the money to  Payment must be submitted via Bank Wire Transfer to an
eBay Financing Center Agent in charge of this transaction. Below is a portion of the instructions.

Check out the story above, and you will see that the Title of my article ask a tough question…  Who Does the TSA work for?

As Katie Pavlick points out the TSA has NOT prevented any attacks.

Rep. Paul Broun (R-Ga.), a member of the House Homeland Security Committee, tells bout how the TSA people patted down an elderly woman, a boy but, completely ignored a man in arab dress who just walked through the security screen.  If you listen to the entire clip you will hear Janet Napolitano explain that TSA continues to work in the “background” to make sure security of the American people…

She is also the person who had the gall to stand in a press conference and say that the underwear bomber incident proved that the system works…  even though the only reason he was not able to blow up the plane was because his, so-called, bomb did not go off.  If the TSA system had work, as she said it did, he would not have been able to get it on the plane.

My brother lives in Colorado, and a couple of years ago, must have been about 5, we, my mother and I, went to Colorado to visit my brother and my sister-in-law.  While we were going through Security at the Sarasota/Bradenton I. A., or SRQ, the TSA people ruined a jar of my Moms face powder by opening the jar, and jamming the applicator into the powder because he was too stupid to either ask what it was, or to just pick up the applicator, one of the puffy pads used to apply the powder to your face, and see what was underneath.  I don’t know if maybe he thought it might prove to be anthrax,or something, but I have been impressed by the stories I have heard about TSA would that make me wonder if they have to assign someone to make sure their employees can find their way to work.

Sure they need to make friends with the Left Wingers but then do they have to bully the people who don’t look like ARAB TERRORIST?

I guess it does…